We are located at Romans sur Isère (France) close to the manufacture of our partner Covestro Elastomers where we produce both all our polyurethane products and machines in order to pour our solutions.

Our solutions are particularly designed for rail installed onto/into a concrete slab with special regards to fastening, insulation and water tightness matters.

Our products meet the requirements of main railways specifications. 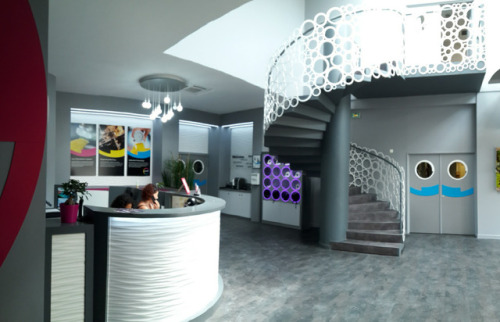 The development of track laying on concrete slabs as a replacement for a ballast installation has led to the development of new processes to meet both the requirements of rail fastening and those specific to its concrete structure.

We present hereafter the main specifications taken into account in the development and design of our polymer processes commonly called « resins ».

The use of polymers to fix the rail on a concrete structure allows the transmission of rail forces and their recovery by the concrete surface in the frame of two types of rail laying:

In all cases it is necessary that the surface cohesion value of the concrete measured by a direct tensile test (NF EN 1542) allows the recovery of the forces transmitted by the polymer.

The circulation of trams / metros has a dynamic impact on many components of the track structure, generating undesirable vibrations that propagate through the ground to reach the foundations of buildings.

From the foundations, the vibrations propagate through the structure and can create, in addition to the inconvenience related to the vibrations, unacceptable noise levels for the occupants of the building.

The circulation of rolling stock causes the emission of vibrations which, through the ground, can be transmitted over great distances. The origin of the vibrations is due to the dynamic excitation of the wheel on the rail generated by all rolling loads, the rail-wheel contact and the geometric imperfections of the wheels and rails.

Metros and trams are powered by a direct current and the current return is through the rails. These rails are isolated from the ground but a small part of the current can try to take another path including uninsulated continuous metal structures such as pipes, cables, etc… The currents flowing in the ground and coming from electric traction systems are called « stray currents ». These stray currents are likely to cause more or less rapid corrosion phenomena.

The norm 50122-2 therefore requires that the traction return current be performed only by the track with a weak electrical longitudinal resistance of rails and an isolated track from the ground.

The thermosetting polyurethane (PUR) elastomers we offer are synthetic polymers whose macromolecules contain a number of urethane functions. They are obtained by copolymerization between a prepolymer and a chain extender.

The prepolymer is obtained by reaction between a glycol and an MDI diisocyanate. The selected glycol is polyether because it gives the elastomer good resistance to hydrolysis, good elasticity at low temperature, good resilience over a wide temperature range and good resistance to microorganisms.
The chain extender is either an amine (organic compound derived from ammonia) or an alcohol.

The epoxy-based polymers (epoxies by abuse of language) are obtained by polymerization reaction of epoxide monomers (obtained by oxidation of an alkene, unsaturated hydrocarbon such as ethylene) with a crosslinking agent (called hardener): often an amine.

Polymeric processes according to their nature (polyurethane, epoxy …) require or not the prior application of a primer to adhere perfectly on the support (concrete, metal, etc …) prepared.
These primers are polymers in the solvent phase to lower their viscosity, impregnate the support and allow the perfect bond between the support and the « resin »: these are the primers of bonding.
The primers also provide the protective function of the prepared support (corrosion, moisture recovery) between the preparation phases of the support, which they facilitate the cleaning, and the application of the polymer process: these are the waiting primers. These waiting primers are then covered by the bonding primers or by the resin according to overlapping ranges from few hours to several months.